As was true throughout America, in the Tetons region the 2008 recession dealt a severe blow to the construction and real estate industries. What made this blow especially difficult was that, for nearly 50 years, construction and real estate had formed the foundation of the Tetons region’s middle class, providing good-paying jobs to thousands of workers and their families.

What would take construction’s place as the foundation of the region’s middle class? More importantly, rather than simply be victims to outside forces, could people living in the Tetons region identify strategies and steps which would allow them to create a future which complements the community’s values, character, and resources?

To begin to answer these questions, in January 2012 the Charture Institute organized “22 in 21: Jackson Hole in the 21st Century.” Even though the event coincided with the first powder day of the ski season, a sell-out crowd of 140 people attended, a testimony to how deeply the community cares about its future. That success led to Charture making it an annual event, with the second “22 in 21″ being held in January 2013.

While 22 in 21’s initial focus has been on the region’s economy, as the phrase “creating a future which complements the community’s values, character, and resources” suggests, 22 in 21 recognizes that the economy is only one facet of the larger community. This holistic view is reflected in the event’s agenda, which incorporates a wide range of the community’s elements.

“22 in 21″ is a bit of a misnomer. The Tetons region forms one community spanning two states and three counties: Teton County, Wyoming (commonly referred to as Jackson Hole); Teton County, Idaho (the Teton Valley); and the northern half of Lincoln County, Wyoming (the Star Valley). While Jackson Hole is the economic center of the Tetons region, its fate is inextricably bound with those of the Teton and Star valleys: if roads between the three valleys close, the effects are felt in all three counties.

22 in 21 is a project of the Charture Institute, a Jackson, Wyoming-based think tank which helps communities create futures which complement their values, character, and resources.

Charture’s work has three facets: data-driven research (such as the Jackson Hole Compass); sustainability-related actions (such as “22 in 21”); and funding sustainability projects through our 1% for the Tetons program. 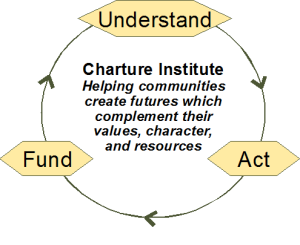 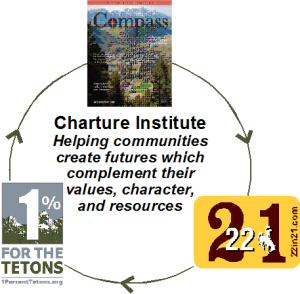